The Mainnet launch follows a year of extensive partnership-building, ecosystem development and growth.


The announcement follows an extensive year of partnership-building, which saw 21 top-tier initial validators pledging their support to Oasys, including a wide range of established gaming giants such as Square Enix, SEGA, Ubisoft, Bandai Namco Research and Netmarble. Other Web3 ecosystem companies that have partnered with Oasys include ConsenSys and tofuNFT.

The launch comes alongside a recent and extensive code audit by Quantstamp, a leading blockchain security firm whose client list includes some of the industry's largest blockchain projects such as Ethereum, Solana, Cardano and Near.

Oasys' Mainnet will be implemented in three distinct phases, designed to stabilise, integrate and enhance the overall ecosystem. Oasys will commence the first phase of its launch on 25 October.

As part of the first phase, Oasys' 21 initial validators will begin taking operations of all nodes and ensuring that Oasys Layer 1, the Hub-Layer, can maintain stable performance. The second phase of the launch is expected to commence soon after by 8 November, and begin to integrate Oasys Layer 2, the Verse-Layer, on top of the existing framework.

After both the Hub-Layer and Verse-Layer are stabilised, the third and final phase of the launch will begin on 22 November and is intended to integrate essential components of the Oasys ecosystem for gaming performance and user experience, such as the Oasys-Hub, a portal interface for users to engage with.


Daiki Moriyama, Director, Oasys, said: "The blockchain gaming ecosystem has grown rapidly over the past few years, reflecting an increasing appreciation of the value that projects such as Oasys have brought to the wider industry. However, now is not the time to reflect on past accomplishments, but focus on the exciting possibilities of the future. The Mainnet launch is a significant step forward in creating a fully-functional, public-led gaming blockchain that will transform the gaming future and give extensive value to players and game developers alike."

Earlier this year, Oasys raised USD20m in a private token sale led by Republic Capital, Jump Crypto, Crypto.com, Huobi, Kucoin, Gate.io, Bitbank and Mirana Ventures. Oasys' Mainnet launch is the final step ahead of an eventual public token listing, and the project is concurrently working to bring in more strategic investors and partners.

With the support of both traditional and crypto-native partners in the industry, Oasys will continue to focus on building better experiences and shaping the future of blockchain gaming.

About Oasys
Oasys was established in February 2022 to increase mainstream play-and-earn adoption, and at launch, committed to partnering with 21 gaming and Web3 tech companies to act as validators, such as Bandai Namco Research, SEGA, Ubisoft and Yield Guild Games. Led by a team of blockchain experts and joining forces with the biggest gaming company names to serve as the initial validators, Oasys is revolutionising the gaming industry with its Proof-of-Stake (PoS) based eco-friendly blockchain.

With a focus on creating an ecosystem for gamers and developers to distribute and develop blockchain-based games, Oasys solves the problems game developers face when building games on the blockchain. The trifecta approach of the fastest network powered by the gaming community, a scalable network powered by AAA game developers and the blockchain offering the best user experience with fast transactions and zero gas fees for users, readies participants to enter the Oasys and play. 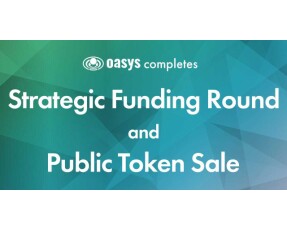 Oasys Completes Strategic Funding Round From Galaxy Interactive and Nexon