Mr. LEUNG Wang-ching, Clarence, Undersecretary for Home and Youth Affairs, said, "The venue is decorated exquisitely today, with well-organized arrangements and reception. I would like to congratulate the organizer, the YDAHK, and the co-organizer, the Asia Children Education Association, on the completed success of this event. Just now, I saw students from different secondary schools and guests from different sectors pursuing their passion during the games, and that's fascinating. It is indeed a great sports activity to celebrate "Starting a New Chapter for Hong Kong Together" and the 25th anniversary of the establishment of the HKSAR."

Mr. Lau Kan-sum, the Chairman of the YDAHK, said "Today, I watched the 'Secondary School Basketball Reunification Cup - celebrating the 25th Anniversary of the establishment of the HKSAR' basketball games organized by the YDAHK. Students were cheering for the players from time to time, during which I also witnessed the tacit cooperation and excellent team spirit among the players. I am a basketball fan, also the representatives of the YDAHK Board of Directors, played in the Guest Invitation Game with my friends. We have been one team for many games. We have learnt that the victory in a basketball game requires not only excellent individual skills but also the teamwork. Today, those who have achieved awards in various aspects relied on their personal vision and intelligence. It was also the perfect opportunity to utilizing everyone's strengths and cooperated well with others.

Ms. Lee Pui-ah, the Executive President of the YDAHK, said in her speech, "The competition came to a satisfactory end. We hope more students will enjoy the fun of playing basketball through this game. This competition is also a challenging for students' team spirit; we believe all teams have further enhanced their sense of cohesion. May students love playing sports and be a person with all-rounded development in ethics, intellect and physique. I look forward to seeing you again in the next Reunification Cup competition." 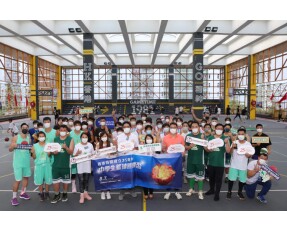