Inspired by Shiba Inu, a puppy that has been used widely as emojis in IT forums and the cryptocurrency market, as well as the iconic waving cat, technine created its first NFT collection "Shiba9". Each Shiba9 is a unique NFT with IT elements added to represent technine as an IT solutions company, with messages as a blessing to the NFT owners for fortune, wealth, and good health in the post-pandemic period.

"Shiba9 is a free NFT collection, and anyone can get a whitelist token through our Shiba9 NFT website to redeem a free NFT. We wish to provide a free minting experience to the public, to promote the technology instead of gaining profits through our 3rd-anniversary campaign," said Lucas Mo, Chief Operating Officer of technine.

The Shiba9 NFT minting tool was developed by a team of blockchain experts of NineBlocks, a new company established by technine, which dedicates to bringing blockchain advice and helping enterprises adopt this powerful technology to transform their businesses to welcome the Web3 era.

"We see blockchain and NFT as the core of IT in the future, and we will continue exploring the possible implementations of NFT and blockchain technology for different industries and scenarios, to leverage its advantages in immutability, transaction transparency, and data security for companies and the public."

Shiba9 NFT website with a minting tool has already launched to the public in early July. Visit shiba9.technine.io to get a whitelist token to redeem a free Shiba9 NFT and share our joy of technine's 3-year anniversary.

About technine
Tech Nine Limited (technine) is a rapidly-growing software R&D house and systems integrator founded by experienced IT experts supported by a team of Hong Kong developers. We develop mobile apps & web-apps, cloud-based systems and design of cloud server infrastructure, as well as implement IoT and blockchain solutions that can improve operational efficiency and boost business growth. Visit www.technine.io for more details.

About NineBlocks
NineBlocks Limited (NineBlocks) is a blockchain solutions company established by technine, supported by a team of blockchain developers, dedicated to providing advice and customized blockchain solutions including DApp, DeFi, GameFi, smart contract and NFT development services to enterprises, helping them to adopt blockchain technology and transform their businesses for the Web3 era. Visit 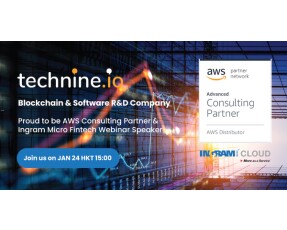