North Vancouver, Canada - Newsfile Corp. - June 6, 2022 - Lion One Metals Limited (TSXV: LIO) (OTCQX: LOMLF) (ASX: LLO) ("Lion One" or the "Company") is delighted to announce the discovery of a major new feeder structure at its Tuvatu Alkaline Gold Project in Fiji. Hole TUG-141, targeting a complex network of high-grade structures called the 500 Zone, has encountered the longest high-grade intercept yet recorded at Tuvatu, 20.86 g/t Au over 75.9m, including 43.62 g/t Au over 30.0m which includes 90.35 g/t Au over 7.2m. The new discovery is located at depth beneath the current resource fully within the permit boundaries of the Tuvatu mining lease.

High-grade intercepts from TUG-141 include:

Lion One CEO, Walter Berukoff, stated: "Like the initial discovery of the high-grade 500 Zone drilled two years ago, I believe this new robust high-grade gold feeder mineralization encountered by hole TUG-141 represents a substantial discovery for Lion One. The notable high grades and continuity of mineralization of this intercept demonstrate Tuvatu's potential to become a large-scale, high-grade underground gold mine. I have long encouraged our team to find that "gold room" at Tuvatu, and hole TUG-141 leads me to believe they have found it. We have only to look at other notable large alkaline Au deposits as direct analogues to better understand what this latest discovery tells us, and it is clear that the discovery of a major high-grade feeder such as this should be viewed as very promising. I am confident that Tuvatu will one day fall in the ranks of notable multi-million ounce Au deposits such as Porgera and Vatukoula. I commend our team on this truly outstanding discovery and I look forward to continued successful execution of both our exploration strategy to realize growth at Tuvatu and our development strategy targeting the commencement of gold production in the second half of 2023."

Lion One Senior VP of Exploration, Sergio Cattalani, commented: "The mineralized intercepts reported by TUG-141 represent a highly significant development. The grades and continuity observed by the intercepts in hole TUG-141 are of a magnitude not previously documented at Tuvatu, and highlights the largely untapped potential of this deposit. The significance of having identified what may be a new principal feeder conduit for Tuvatu confirms the model that has driven this deep exploration program since the discovery of hole TUDDH-500 in July 2020. Our immediate priority is to follow up of this significant discovery with additional drilling in what remains a relatively poorly drilled portion of the Tuvatu system. Lion One, is now more than ever, convinced of the potential of Tuvatu to become a prominent, multi-million ounce Au deposit at the top of the Au grade distribution worldwide."

Lion One Technical Advisor, Quinton Hennigh, commented: "Alkaline gold systems tend to be deep-rooted and very structurally complex. Exploring them can be analogous to drilling a tree from the top down. In the shallow part of the system, one finds the upper "branches," or gold-bearing lodes, but as exploration persists to depth, bigger and bigger "branches," or lodes, are encountered ultimately leading to the "trunk," the feeder. The way this remarkable discovery at Tuvatu has unfolded is quite similar to the experience at Porgera, where after approximately ten years of diligent drilling, the high-grade Romane Fault Zone was discovered beneath a myriad of smaller lodes. What is most exciting about this discovery is that now that we have a clear idea where the deep fluid-tapping conduit of this system is located, we can effectively chase it to depth, and alkaline gold systems are known to persist to great depths, sometimes as deep as 2 km. Considering this intercept is only approximately 500m below surface, this discovery is wide open for growth at depth."

TUG-141 was drilled in the area between modelled 500 Zone lodes 500A, 500C and 500F (Figure 1) where it intersected continuous high-grade Au mineralization grading 20.86 g/t Au over 75.9m that is predominantly hosted by intensely altered, fractured and brecciated andesite. The highest grade core of this zone is characterized by hydrothermal breccia displaying extreme silicification, potassic alteration and sulfidation with regular occurrences of visible gold (Figure 2). In addition, the presence of abundant roscoelite (a vanadium mica mineral) is very encouraging and is a mineral synonymous with the high-grade zones of world-class alkali gold systems such as Cripple Creek in Colorado and Porgera in Papua New Guinea. Some fragments within portions of this breccia are visibly milled, or rounded, indicating vigorous fluid flow. Observations of fracture patterns and textures ranging from incipient and in-situ to full-on brecciation (Figure 2) point to this zone being a dilational breccia that likely formed along a major structural intersection where stresses were being released at the time of mineralization. Rapid depressurisation accompanying seismic movement along such a dilational zone would allow rapid ascent of hydrothermal fluids resulting in silicification, K-metasomatism, sulfidation and rapid precipitation of Au. Textures of minerals observed in veins and open spaces is consistent with a rapid depositional regime.

Lion One is concurrently undertaking a two-pronged exploration drill campaign: 1) shallow infill drilling to enhance definition of its current resource in preparation for mine planning, and 2) deep drilling focussed on better understanding the geometry and extent of the underlying high-grade feeder network. As part of the latter program, hole TUG-141 targeted the upper portion of the 500 Zone at depths between approximately 450-550m where it is projected to connect with the base of lodes making up the Inferred resource. As discussed above, TUG-141 drilled into a very wide and exceptionally high-grade zone, 20.86 g/t Au over 75.9m, cored by hydrothermal breccia (Figure 2). Such a zone of extreme fracturing and brecciation has never before been observed at Tuvatu. It is significant to note that the bulk of this mineralized interval is hosted within andesite rather than by intrusive monzonite, the typical host rock for many lodes at Tuvatu. The significance of this observation has yet to be determined.

Furthermore, it is also notable that the nearest drill holes to TUG-141 are TUG-135 (70m below), TUG-136 (45m to the E), and TUG-138 (60m to the W), indicating that there is considerable space for a substantial increase in the ultimate size of the feeder conduit. All three of these holes have returned previously reported bonanza grade mineralization, similar in tenor and texture to that in TUG-141, including:

The area remains open at depth. This target has now become of utmost importance for follow up drilling.

In addition to the impressive intercept of 20.86 g/t Au over 75.9m discussed above, hole TUG-141 encountered numerous other significant mineralized intercepts both above and below this interval including:

Above the high-grade intercept

Below the high-grade intercept

Complete results, received to date, from hole TUG-141 are summarized below in Table 1. This is the first drill hole in this part of the Tuvatu alkaline gold system, and as such, orientation and true thicknesses of mineralized intercepts discussed above are not known at this time. Further drilling is required to better understand this new discovery. At the time of writing, hole TUG-141 is still being drilled, and is currently >600m in depth with other mineralised structures yet to be assayed. 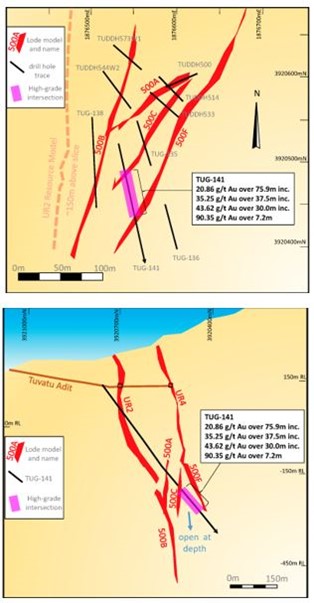 Figure 1. Plan view (upper) and vertical section looking E (lower) of the trace of TUG-141 and selected drill holes relative to the 500 Zone lodes modeled to date. TUG-141 was drilled from underground along the Tuvatu exploration decline. The traces of known lodes UR2 and UR4, and modelled lodes of the 500 Zone feeder are shown in red. 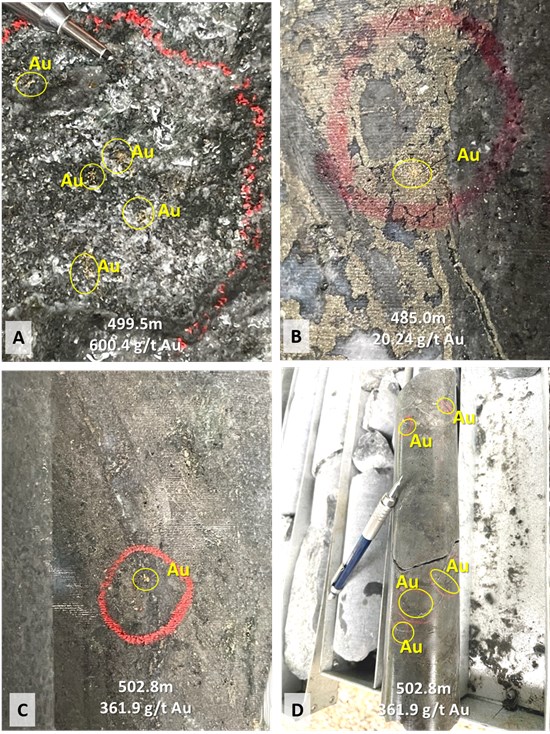 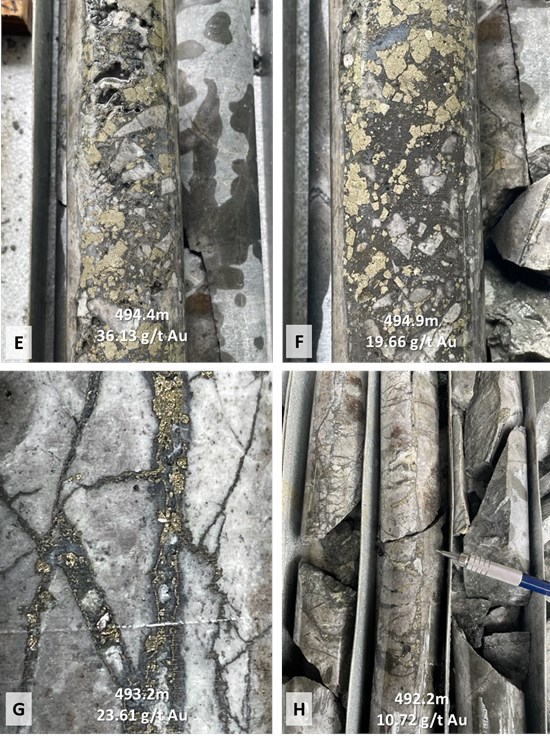 
Mineralization is observed as two generations of pyrite; an earlier bright euhedral pyrite that forms coarse crystals in the core of the veins and breccia, and a darker brownish, spongy pyrite that typically forms extremely fine-grained encrustations or overgrowths on earlier pyrite and wallrock fragments, as well as lining the edges of most veins (Figure 2). Quartz occurs commonly as bluish grey, amorphous to locally colloform silica. Open space vuggy textures are common, as are visible gold grains. Highest grades (up to 600 g/t Au) appear to be associated with an interval of intense pervasive silicification and sulfidation by up to 30% or more extremely fine-grained pyrite developed throughout the host rock, giving the rock an overall massive chocolate brown appearance (Figure 2). The intensity of replacement suggests this is a zone of very high and sustained fluid flux.


Qualified Person
In accordance with National Instrument 43-101 - Standards of Disclosure for Mineral Projects ("NI 43-101"), Sergio Cattalani, P.Geo, Senior Vice President Exploration, is the Qualified Person for the Company and has reviewed and is responsible for the technical and scientific content of this news release.


QAQC Procedures
Lion One adheres to rigorous QAQC procedures above and beyond basic regulatory guidelines in conducting its sampling, drilling, testing, and analyses. The Company utilizes its own fleet of diamond drill rigs, using PQ, HQ and NQ sized drill core rods. Drill core is logged and split by Lion One personnel on site. Samples are delivered to and analysed at the Company's geochemical and metallurgical laboratory in Fiji. Duplicates of all samples with grades above 0.5 g/t Au are both re-assayed at Lion One's lab and delivered to ALS Global Laboratories in Australia (ALS) for check assay determinations. All samples for all high-grade intercepts are sent to ALS for check assays. All samples are pulverized to 80% passing through 75 microns. Gold analysis is carried out using fire assay with an AA finish. Samples that have returned grades greater than 10.00 g/t Au are then re-analysed by gravimetric method. For samples that return greater than 0.50 g/t Au, repeat fire assay runs are carried out and repeated until a result is obtained that is within 10% of the original fire assay run. For samples with multiple fire assay runs, the average of duplicate runs is presented. Lion One's laboratory can also assay for a range of 71 other elements through Inductively Coupled Plasma Optical Emission Spectrometry (ICP-OES), but currently focuses on a suite of 9 important pathfinder elements. All duplicate anomalous samples are sent to ALS labs in Townsville QLD and are analysed by the same methods (Au-AA26, and Au-GRA22 where applicable). ALS also analyses for 33 pathfinder elements by HF-HNO3-HClO4 acid digestion, HCl leach and ICP-AES (method ME-ICP61).


About Lion One Metals Limited
Lion One's flagship asset is 100% owned, fully permitted high grade Tuvatu Alkaline Gold Project, located on the island of Viti Levu in Fiji. Lion One envisions a low-cost high-grade underground gold mining operation at Tuvatu coupled with exciting exploration upside inside its tenements covering the entire Navilawa Caldera, an underexplored yet highly prospective 7km diameter alkaline gold system. Lion One's CEO Walter Berukoff leads an experienced team of explorers and mine builders and has owned or operated over 20 mines in 7 countries. As the founder and former CEO of Miramar Mines, Northern Orion, and La Mancha Resources, Walter is credited with building over $3 billion of value for shareholders.


Neither the TSX Venture Exchange nor its Regulation Service Provider
accepts responsibility for the adequacy or accuracy of this release. 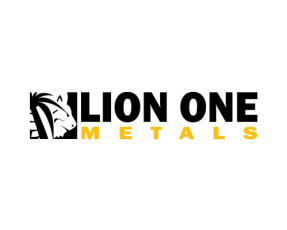 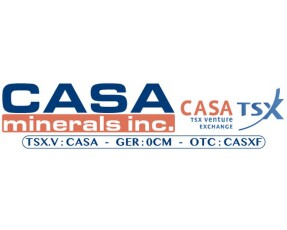